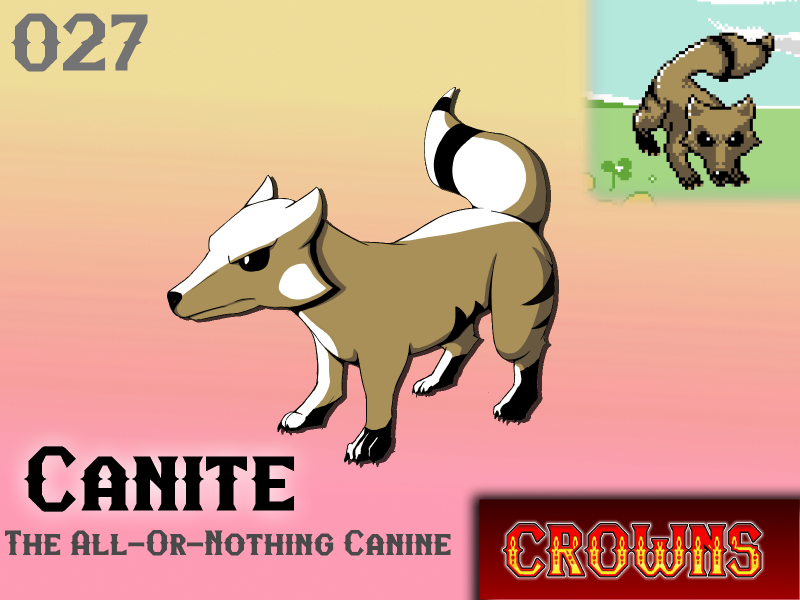 On mountain-tops where Raptor does not roam, you're bound to find packs of Canite. The Alpha demands the lion's share of prey and others are subservient. However, Brute-type monsters have little patience for being strong-armed. Sooner or later, a challenger will rise up.

Unlike other pack animals, the victor is decided not after a desperate brawl, but instead a single, vicious attack. Both Canite will stand facing each other and wait, carefully observing the other for an opening. When the pivotal moment arrives both will lunge at each other with a single attack, focusing all their power into one blow. The weaker Canite does not survive.

This battle leaves the victor completely exhausted, however, if neither manages to destroy the other, both combatants are often torn apart and eaten by the collective group. This leads to pure chaos as fights break out across the pack to establish a new pecking order.

Will Canite make your team?
Top

This one is very nice, but darwhol will be my pick
I love dwarves!
Top

Picking him
Creator of the DLC Monster Sharprachnid

Skype: live:ultimoben (The field wouldn't let me put it in properly lol)
Top

Sounds vicious! I like this one, though out of the default starters I would still pick Darwhol. And that's only if I were not potentially getting Hauntremolo as mine xD
Hi! I'm the creator of the DLC monster Hauntremolo! Vajra wrote:Sounds vicious! I like this one, though out of the default starters I would still pick Darwhol. And that's only if I were not potentially getting Hauntremolo as mine xD

Thanks for tuning in every week you three!

Monsters of the Week will continue, and we're working (very) hard on getting the demo ready.
Top

Ok, i am literaly addicted to this forum. First thing i do in the morning (and every hour) is check this forum.