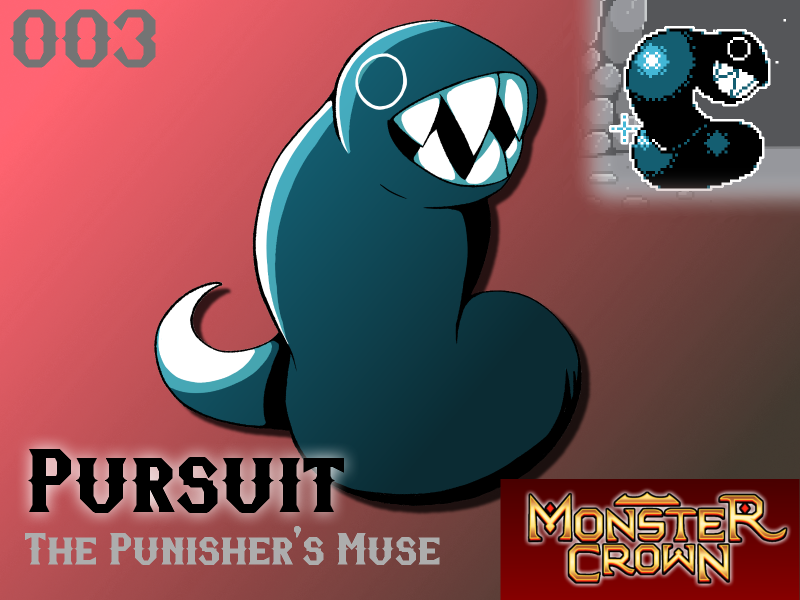 A now-fallen King that was known for his rage once ruled the central Kingdom. This King was wicked, and believed in the depths of torture and excessive punishment for those that crossed him, or failed to meet his satisfaction.

One day he paid a visit to his brother, a man obsessed with worlds beyond his own. During his visit, he encountered a beast that the brother had conjured during his rituals. This beast was hulking, and stared with white eyes and an unsettling smile from the darkness of the chamber. As the light glimmered on its scaly, sparkling hide the King approached it.

The King was thoroughly impressed with the beast's other-worldly strength and viciousness, and so decided to take it with him on his return trip. The wrathful King had yet another tool for punishment at his disposal, and in the years that followed he spared no opportunity to play with his new pet.

There are no records of Pursuit fighting alongside his king during the war, it is unknown what became of the beast, or where it may now lurk.

Will Pursuit make your team?
Top

Nope, sounds like too evil a bugger. I sentence him to Doom at the Power of my Dracoyle & Might of my Ix's awesome feety grip!

I totally dig how we are not pressured to 'catchem all' & we can decide for ourselves what kinda dudes we wanna raise.

Absolutely! I fear for Pursuit when you hit the ring