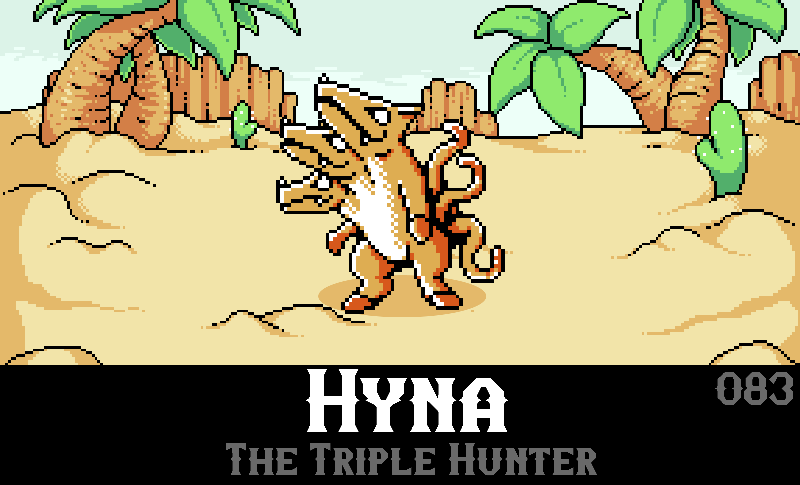 While Drangus pose a powerful threat to humans, the feverish attacks and increased numbers of Hyna make this creature the number one reason to avoid long-distance treks across the Desperado Province.

Their primary prey is Gualop, which will easily provide more than enough meat for a family of Hyna, however, their greedy nature, even amongst their own heads often mean each Hyna in a pack will seek to take down their own Gualop, leading to excessive hunting. Hyna avoid fights with other predators, so while it is essential to travel with a monster or recruit a tamer to escort you across Hyna territory even an amateur tamers can provide this service.

The red color on the ends of Hyna's feet and tail seem to be attributed to the slight spiciness of Guallop meat and partially fades if the monster begins to starve, and burns a fiery red in the most proficient of hunters. For anyone unfortunate enough to travel Desperado province alone, coming face-to-face with this ravenous hunter will likely mean serious harm or death. For what little comfort it provides, those that notice a bright, fiery texture to the monster's fur can at least know their troubles will be over quickly.
Top

Hmm... unsure if this bugger is really strong enough to be worth the while... will have to ponder on it.

Well... if I find other multi-headed Monsters, I guess it could be fun to Fuse them & this bugger together just to see what happens.