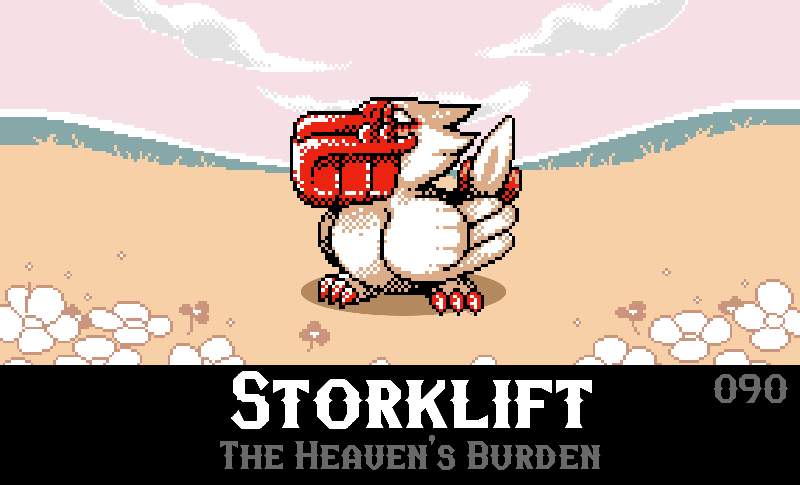 Early in Human history Storklift were much more plentiful. Enjoying the coast, they could be seen using their powerful wings to fly low above the surface, descending and scooping a crate-load of fish into their cavernous breaks with ease. Their impressive natural size meant they were generally predator-less and often lived peaceful lives, it is said that their intelligence and kindness were such that during several dry-season fires they collected huge volumes of water with their mouths, dropping it over the area ablaze.

Once mankind perfected Monster taming however, it became easy to band together with several large, powerful monsters and corner a Storklift. Their large volume of meat made them appealing targets and they were all but wiped out during the reign of the old kings.

As their numbers dwindled and news spread, a resourceful young tamer took what little gold her family had stashed and recruited a band of respectable tamers to escort her on a mission to track down one of the now rare Storklift in the wild. After finally locating a specimen, she offered it a Pact that would allow it freedom and protection in exchange for occasionally lending its strength to her family. Soon after, The Roost postal service was born, allowing delivery and transit across the vast distances of Crown Island.

Will Storklift make your team?
Top

Storklift helped people by putting out Fires outta the kindness of their heart & the peoples thanked them for this by EATING THEM!!? Wow, what Ingrates... ya'd think those people were Starbound Wild Florans... O_0

With that said, I think these are cool dudes... they're welcome on my Team!

The Head seems awfully pixelated to the point I can't really make out the Beak Features or Eyes all that well... might need a bit of tweaking & spiffing up.

Lastly... interesting thought...: It's tempting to see if I could fuse a Storklift & a Fire Monster together to create a Storklift Variant that could withstand extreme heat & potentially scoop up big amounts of LAVA instead of Water & dump that on the Ingrates that ate them for saving their sorry asses from Village Fires...? >:D
Top
Post Reply
2 posts • Page 1 of 1